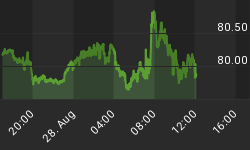 The defining characteristics of the markets these days seem to include:

You may notice some commonality about the four defining characteristics as I have enumerated them above. I will add that this commonality - that seemingly only central bank liquidity operations matter these days - is also the reason that I haven't been writing as much these last days, weeks, and months. As someone who has watched the Fed for a long time, I might have a decent guess as to when the Fed might change course...but probably no better than many other watchers. (Moreover, as I have said before, whether the Fed actually hikes rates or not probably doesn't matter either as long as there is adequate liquidity, which is a question independent at the moment from rates. Refer again to the four characteristics.)

Let us take these one at a time.

Central bank mistakes don't matter as much as the question of whether central banks are adding enough liquidity. Exhibit A is the fact that 10-year yields are negative in Switzerland, under 1% in France, Germany, Sweden, and the Netherlands, and under 1.60% in (get this) Italy, Spain, and Portugal. This is despite the fact that Greece is likely to leave the Euro either sooner or later, provoking existential questions about whether Italy, Spain, Portugal, and maybe France can also remain in the Eurozone. We can debate whether "likely to leave the Euro" means 20% chance or 80% chance, but if the chance is not negligible - and it certainly looks to be something more than negligible - then it is incredible that the Italian, Portuguese, and Spanish yields are all so low. Yes, it's largely because of the ECB. Quod erat demonstrandum.

Economic growth numbers do not matter as much as central bank profligacy. The Citigroup Economic Surprise index for the US just fell below -50 for the first time since 2012 (see chart, source Bloomberg).

Now, weaker-than-expected data spelled bad news for stocks in 2008, 2010, and 2011, but not since then. I wonder why? Right: central bank liquidity trumps. Quod erat demonstrandum.

Recently, I have read a fair amount about increasingly-frequent bouts of illiquidity in various markets. The US TIPS market has comfortably more than a trillion dollars' worth of outstanding issues, but has been whipsawed unmercifully over the last week and a half (after, it should be said, a hellacious rebound from the outrageous selloff in H2 of last year - see chart of 10-year breakevens, source Bloomberg). But that market is not alone by any stretch of the imagination. Energy markets, individual stock names and the stock market generally, and the list goes on.

It isn't that there has been dramatic volatility - volatility happens. It's that the effective bid/offer spreads have been widening and the amount of securities that can be moved on the bid and offer has been declining (to say it another way, the real market for size has been widening, or the cost of liquidity has been rising). This in itself is not surprising: some pundits, myself included, predicted five years ago that instituting the Volcker Rule, and other elements of Dodd-Frank that tended to decrease the risk budgets of market liquidity-makers, would diminish market liquidity. (See here, here, and here for some examples of my own statements on the matter). But the other prediction, that markets would fall as a result of the diminished market liquidity - less-liquid stocks for example routinely trade at lower P/E ratios all else being equal - has proven incorrect. Why? I would suggest the central bank's provision of extraordinary monetary liquidity has helped keep markets elevated despite thinning liquidity. Quod erat demonstrandum.

So what is there to write about? Well, I could talk about the dollar, which at +25% from last June is starting to be in the realm of interesting. But this too is just another manifestation of central bank shenanigans - specifically, the notion that every central bank is being easier than our Federal Reserve. So it comes back to the same thing.

So all roads lead to the question of central bank liquidity provision. This primal single-note drum-beat is, if nothing else, exquisitely boring. But boring isn't as annoying as the fact that it's also wrong. The Fed isn't being any more hawkish this year than it was last year. The growth in the money supply - which is the only metric of significance in the WYSIWYG world of monetary policy - is pretty much at the same level it has been for three years: about 6.0%-6.5% growth year/year (see chart, source Enduring Investments). That's also exactly where UK M2 growth has been. Japanese money growth, while a lot healthier at 3.5% than it was at 2%, is still not doing anything dramatic despite all of the talk of BOJ money printing (color me surprised, by the way).

About the only interesting move in money growth has been in the EZ, which is where observers have been the most skeptical. One year ago, M2 growth in the Eurozone was 2.5%; as of January 2015, it was 5.6%.

The weakness in the Euro, in short, makes sense. The supply of Euros is increasing relative to the former growth trajectories, compared to USD, GBP, and JPY. Increase the relative supply; decrease the price. But the dollar's strength against the rest of the world does not make so much sense. The supply of dollars is still rising at 6.5% per year, and moreover nothing that the Fed is proposing to do with rates is likely to affect the rate of increase in the supply of dollars.

At the end of the day, then, characteristic #4 I listed at the beginning of this article is wrong. It's the perception of central bank liquidity, and not the liquidity itself, that matters to currencies. And that's why I think the dollar's run is going to come to an abrupt end, unless M2 growth inexplicably slows. How soon that run will end I have no idea, but it seems out of bounds to me. At least, if actual central bank liquidity is what matters...and for everything else in the securities markets, it seems to.

Lessons of History, Part 1: Not a Mention of Money