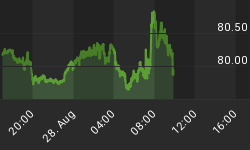 Telecoms giant T-Mobile has agreed to merge with Sprint, valued at $26.5 billion, creating a new, formidable rival in a sector led by AT&T and Verizon—and this is where the 5G race heats up significantly.

If the deal passes the regulatory scrutiny of the Trump administration, the new company will be the third biggest in this space, with the combined value around $146 billion, including debt.

"This combination will create a fierce competitor with the network scale to deliver more for consumers and businesses in the form of lower prices, more innovation, and a second-to-none network experience — and do it all so much faster than either company could on its own," T-Mobile CEO John Legere said in a statement.

"As industry lines blur and we enter the 5G era, consumers and businesses need a company with the disruptive culture and capabilities to force positive change on their behalf," Legere added.

The new company will still be T-Mobile by name and will have two headquarters—one in Washington and the other in Kansas--while Legere will continue to hold the CEO position.

Everyone will be eyeing the potential regulatory hurdles now, as AT&T attempts to acquire Time Warner in a massive deal that is facing some hurdles. It’s also not lost on investors that that an earlier attempt by AT&T to acquire T-Mobile for $39 billion in 2011 was rejected by regulators.

In pre-market trading, Sprint shares plunged nearly 11 percent in response to the merger deal and ostensibly over fears that it may face regulatory hurdles. 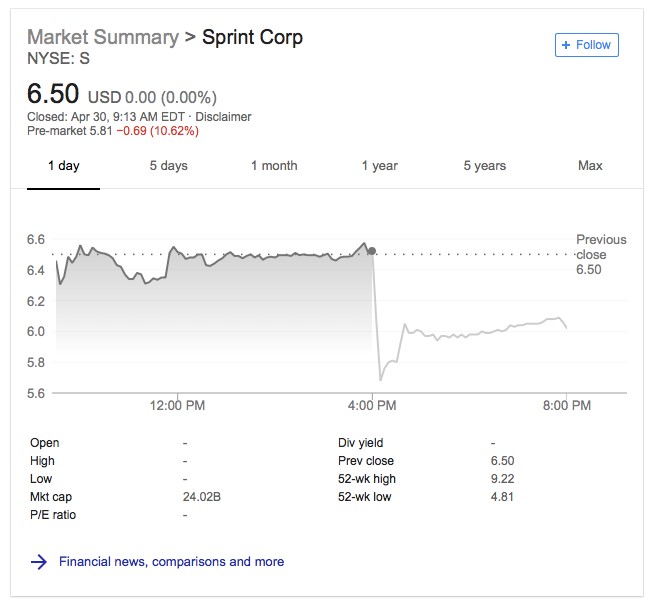 Legere attempted to ease regulatory concerns on Sunday, saying: “This isn’t a case of going from four to three wireless companies. There are now at least seven or eight big competitors in this converging market.” 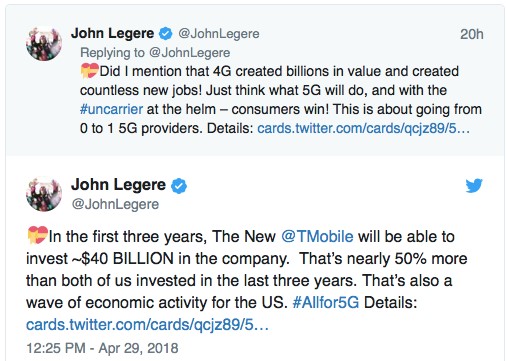 But the regulatory concern isn’t just about competition.

Earlier this year, the federal government blocked Singapore-based Broadcom’s $117-billion takeover bid for Qualcomm, citing national security concerns. Where this gets tricky for T-Mobile/Spring is with the addition of “third party foreign entities”. Germany’s Deutsche Telekom AG will have around 42 percent of the new telecoms company, while Japanese SoftBank will hold around 27 percent.

SoftBank, controlled by Japanese billionaire Masayoshi Son, is giving up control of Sprint, ending up with a minority share in the deal. Son took over Sprint in 2013 and creating this major challenger to AT&T and Verizon was his end-game--even if he didn’t retain majority control. In 2014, the Obama administration quashed his plans to merge with T-Mobile. Last year, when talks for the deal initially launched, Son wasn’t ready to give up control in a merger but has had a change of heart.

Right now, it’s all about 5G—and T-Mobile and Sprint are banking on the Trump administration’s goal of turning the U.S. into the definitive leader in next-gen wireless technology to push this past the regulators.

For now, it’s not enough to allay investor concerns, and T-Mobile stock is down in trading. 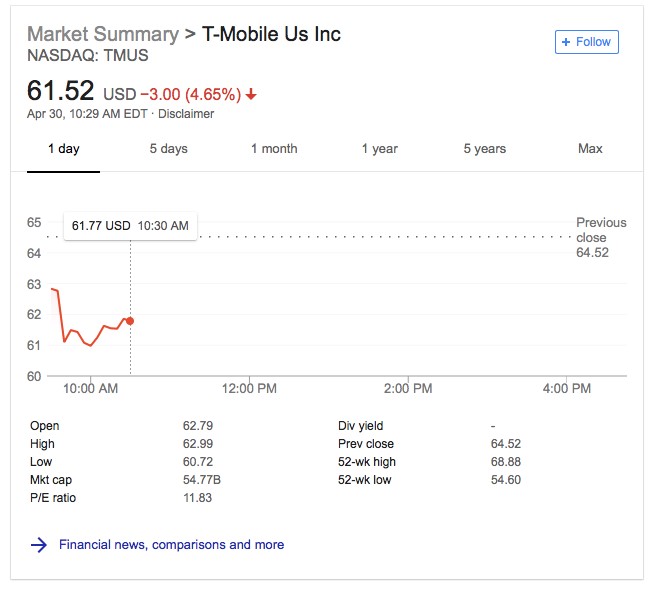 The T-Mobile-Sprint merger aims to take the 5G wireless game to the next level across the U.S. by jointly investing $40 billion over the next three years.

“Only the New T-Mobile will have the network and spectrum capacity to quickly create a broad and deep 5G network in the first few years of the 5G innovation cycle,” Legere said in Sunday’s video announcement. “We can’t do this separately.”