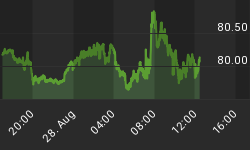 After reading this little known press release a few weeks ago, I started to wonder... and the surprising result is that (except for the Eurodollars element of M3), the data is still available with which to reconstruct M3.

So that's what repos are (see abbreviated definition below) - simply a loan that the Fed makes to banks. The interest rate varies and has been as low as 1% and never higher than the Fed Funds3 rate. The term of the loan varies too - from one day all the way out to what the Fed calls permanent, which means it's of infinite length (it never comes due or has to be paid back per our current understanding).

What do the banks do with those cheap loans of literally billions of dollars?

Well - they either lend them out or invest them or both... and since inflation in its simplest form is creating too much money - it usually is inflationary. Repos are literally money created out of thin air.

Total repos are around $775 billion now, and M3 is about $10.3 trillion, so you can see that repos are a non trivial portion of the amount of "money" in the US. They are also directly and 100% controllable by the Fed, unlike other elements of M3 like CDs over $100k in value... so its very much one of the top five tools in the Fed arsenal in our opinion. Repos are only one of many tools to use in judging where the stock or other markets are headed, but it is a key one

Here are two charts showing two views of repos since 2000.

Notice the correlation between what started to happen in mid 2005 and the gold price, for example:

Notice how the Fed turned up repo creation speed (the black line got even steeper) in about July '02 as the Dow was dropping fast, and also what they may be trying and hoping to do with the Dow now:

Another little known tool of the Fed used in managing interest rates is Securities lending5, and it can be helpful to see what the Fed wants to have happen on the shorter term with bonds and interest rates. It's also quite illustrative of the strong effect that the Fed has and can have on those markets.

Currently, it appears to us that Fed believes they've gone up too far and too fast and are trying to pull them back down some.

Not the holy grail

Do note that like almost anything, not only are the above charts less than perfect but also eventually the current relationships will cease to work well due to definition, focus and other data changes at the Fed and other data sources. M3/M3b may also become less useful too. Then it's back to the drawing board. But they sure beat a coin flip, and have done well as an aid and as additional tools to help make investing decisions.

Download a 300k zip file with Excel sheet inside with full details and M3b calculations.

1. M3 - A very broad measure of total money in the economy issued by the Fed. It includes checking & savings accounts, cash, time deposits, money market funds, etc. The actual full technical definition from the Fed is "M3 consists of M2 plus (1) balances in institutional money market mutual funds; (2) large-denomination time deposits (time deposits in amounts of $100,000 or more); (3) repurchase agreement (RP) liabilities of depository institutions, in denominations of $100,000 or more, on U.S. government and federal agency securities; and (4) Eurodollars held by U.S. addressees at foreign branches of U.S. banks worldwide and at all banking offices in the United Kingdom and Canada. Large-denomination time deposits, RPs, and Eurodollars exclude those amounts held by depository institutions, the U.S. government, foreign banks and official institutions, and money market mutual funds"

2. Repos - Short for repurchase agreement and in its simplest form, a loan of varying duration but usually short term. Repos are one of the primary tools of the Fed in managing money supply, etc.

3. Fed Funds rate - The interest rate at which banks can do temporary borrowing to meet their legal requirements to maintain a level or reserves.

4. Fractional Reserve banking - The practice of banks of retaining only a fraction of their deposits to satisfy demands for withdrawals, and then potentially loaning out the remainder. This practice allows the banking system to actually "create" money, since if they only have to retain 10% of a deposit the other 90% can be loaned out, and then 90% of that 90% (81% of the original) can be loaned out when it is deposited in another bank account by the borrower. And then 90% of that 81% can be loaned out, creating more money... and so on as deposits are made in other banks of the borrowed amount. In effect, one dollar deposited can allow a bank to create at least eight dollars of money (.90 + .81 + .73 + .66 + .59... adds up to over eight).

5. Securities lending - A very specialized portion of what the Federal Reserve banks do (warning: this is an extremely specialized area with many technical terms - be sure to look up any unfamiliar words). Here is the Fed definition: "The Bank provides a secondary and temporary source of securities to the Treasury financing market through a Securities Lending program to promote smooth clearing of Treasury securities. The program offers securities for loan from the System Open Market Account (SOMA) portfolio in accordance with program terms and conditions. Securities loans are awarded to primary dealers based on competitive bidding in an auction held each business day at noon eastern standard time."

In plain English, the Fed loans Treasury bonds, bills and notes to major banks or securities firms and collects interest on those loans. Its primary function though, per the Fed itself is "a secondary and temporary source of securities in the Treasury market" - it helped a great deal in the markets after 9/11/2001 to keep them functioning. (Source, about 9/10 of the way through).