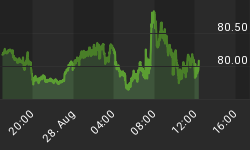 Has an avalanche of policy actions and bank guarantees backstopped the global economy? If stock markets are a gauge of better tidings, it would seem that a bottoming phase might have started. But the jury is still out on whether the bear is simply offering a temporary reprieve.

Meanwhile, bouncing off 12-year lows, the Dow Jones Industrial Average (+7.7%) in March produced the strongest monthly gain in more than six years. This followed the Average's worst January (-8.8%) on record and its third worst February (-11.7%).

Coming off the March 9 lows, the S&P 500 Index has advanced 20.6% in the first 14 trading days of the nascent rally, the most since 1938, based on data compiled by New York-based S&P analyst Howard Silverblatt and reported by Bloomberg. The rapidity with which the price increases have happened is cause for concern, at least in the short term.

The ebb and flow of occurrences has affected stock markets around the word as shown by the charts below, illustrating the turnaround in bourses since the lows of November 20, the subsequent January/February pullback (in some cases breaching the November lows) and then the rally that commenced on March 10. The charts of the S&P 500, the MSCI EAFF Index (representing Europe, Australasia and the Far East - the main benchmark for non-US stocks) and the MSCI Emerging Markets Index show how the drama has been unfolding.

Zeroing in on the numbers, the performances in the table below are given in local currency terms for different measurement terms ended March 31.

From the highs of October 2007 to the end of March, the MSCI World Index and the MSCI Emerging Markets Index lost 52.9% and 58.1% of their respective values. The worst performer was Ireland (-78.3%), with Venezuela (-17.8%) claiming the dubious honor of having fallen the least.

Interestingly, mature countries are still in the red for the first three months of the year, whereas the developing markets have been the ones adding value. By means of example, all four BRIC countries - leaders in the previous bull market - are in positive territory for the year to date and also comfortably ahead of the pack since the November 20 lows. This is a sign that global investors are beginning to take more risk - a necessary ingredient for stock markets in general to improve further.

The gains/declines mentioned above are all in local currency terms. However, converting the movements to US dollar shows a somewhat different picture for the non-dollar countries (see table below). In general, most indices in March showed improved gains as a result of the greenback's weakness.

Click on the image below for a larger table.

Where to from now? A number of stock market indices tested their November lows early in March. In some cases the lows were momentarily breached, but most of these situations have subsequently reversed the damage by rallying strongly. This action indicates that base building remains a likely scenario.

Also, throughout the January/February sell-off, a number of indices remained well above their November lows - for example China's Shanghai Composite Index and Brazil's Bovespa Index. This provides strong evidence of base formation development and it would not be surprising to see these markets among the leaders of the next bull market.