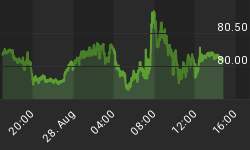 Silver is a Special Metal

It always has been. And on a value basis, it's also a good buy. Silver has been chugging more than gold but once it pops up, it could take off like a bandit.

There are many reasons why silver will go higher and it's just a matter of time. And as our dear friend Richard Russell points out, JP Morgan is aggressively accumulating physical silver by the hundreds of millions of ounces.

This is the largest accumulation of physical silver by a private entity in history!

Some of you may remember when the Hunt Brothers tried to corner the silver market at the peak in 1980 when silver soared to the $50 level. It was a wild moment. And today is even more wild.

JP Morgan obviously thinks silver is going up, and we do too. We think your patience today will be well rewarded in a future rise.

Alan Greenspan also believes gold will be considerably higher in the years ahead. So it's not only central bankers who are looking ahead. Others are too.

Chart 1 shows silver close up since 2013. It has steps, like gold, as you can see. Keep an eye on these levels as they'll tell the story.

Silver could then jump up to the $22 -$24 levels, its next step. By then, it could clearly test the $30, which would be the following step.

The bottom line is, silver has great potential and it appears to be leading the other metals.