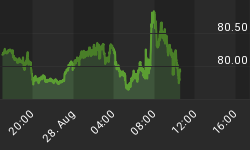 The world is now 12 percent of GDP deeper in debt than it was at a peak debt cycle during the financial crisis in 2009, hitting a whopping $164 trillion, according to the International Monetary Fund (IMF).

Global debt is at a historic high reaching the equivalent of 225 percent of GDP, the IMF said in its newly released Fiscal Monitor, describing China as a “driving force”.

China owns the lion’s share, sucking up almost three-quarters of the increase in private debt since the financial crisis.

But it’s not alone. Two other countries—Japan and U.S.—account for more than half of that global debt, according to the IMF.

And the reason for the alarming debt cycle is the economic collapse during the global financial crisis and the policy response to that; but the IMF also blames the effects of the commodities price crash in 2014, as well as rapid spending growth in emerging markets and low-income developing countries.

In the U.S. case, says the IMF, “fiscal stimulus is happening when the economy is close to full employment, keeping overall deficits above $1 trillion (5 percent of GDP) over the next three years”. Related: The Worst Ways To Buy Cryptocurrency

The U.S. is the only advanced economy that is expected to see a further increase in debt-to-GDP ratio over the next five years—a situation the IMF attributes to Trump’s tax cuts and simultaneous increase in spending.

The debt clock is ticking frantically:

The international body calls on the U.S. to recalibrate fiscal policy to ensure that the government debt-to-GDP ratio declines over the medium term.

On Wednesday, Carl Tannenbaum, chief economist at Chicago-based Northern Trust and former risk specialist at the Fed bank of Chicago, warned that while growth looks good at present, it isn’t going to be enough to control the budget deficit.

Tax cuts the Jobs Act of December will boost immediate-term growth but come together with increased government spending. Echoing IMF sentiments, Tannenbaum said this stimulation of a well-performing economy “changed the nation’s fiscal course in a potentially dangerous way”. 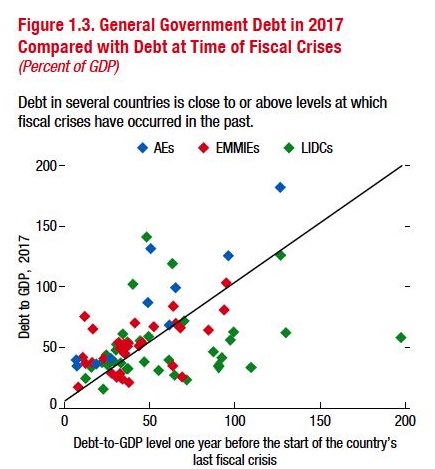 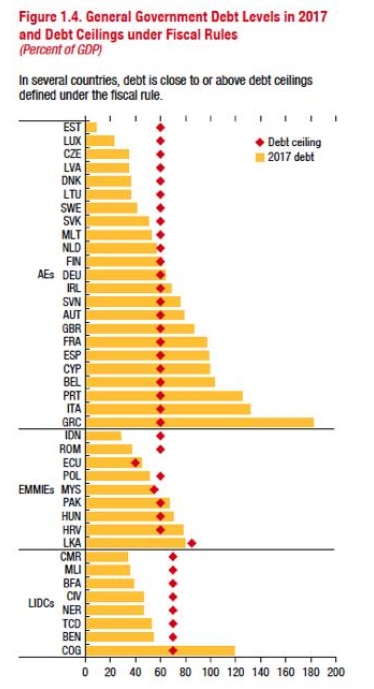 Some 19 countries have either reached or far surpassed their debt ceilings already.

For emerging market and middle-income economies, one-fifth had debt above 70 percent of GDP in 2017—again, mirroring the 2000s and the aftermath of the Asian financial crisis. One-fifth of low-income countries had debt above 60 percent of GDP, and a handful are facing default or restructuring, according to the IMF.